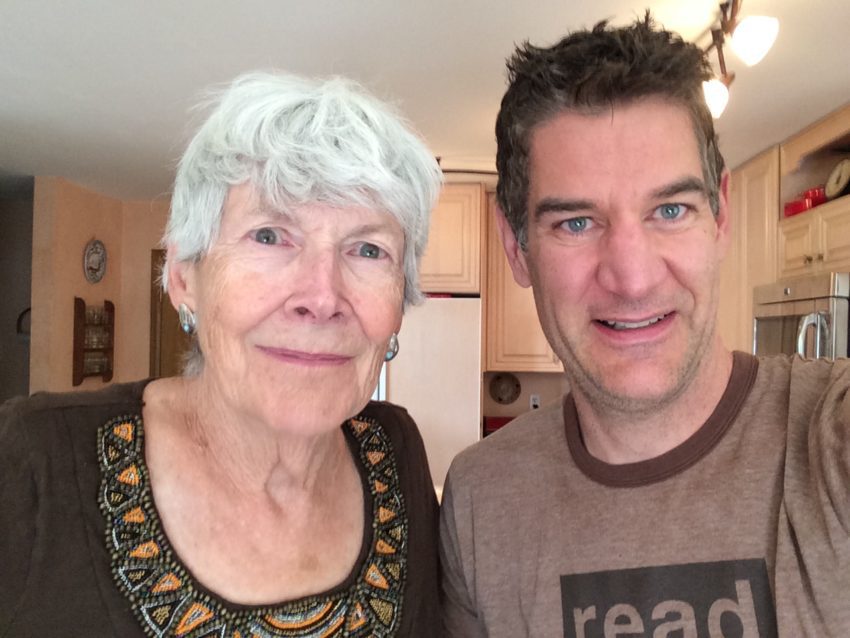 Selfie with my 2nd grade teacher. Yes she really is that tall.

37 years after Mrs Devine was my 2nd grade teacher at Elm School near Chicago, I flew to Colorado to stay with her at her home for several days.

Before I go into all the details, I’ve always thought that her last name was so appropriate. That she was so devine. Then, I looked up “devine” in the dictionary.

a frequent misspelling of divine

It’s not actually a word! I’m shattered. Well, let’s look up “divine” instead.

informal excellent; delightful: he had the most divine smile | that succulent clementine tasted divine.

Now that describes her much better. (Side note: we used to give her a box of oranges every year as a Christmas present)

In 2nd grade, I attended a school called Oak School. It was in the heart of the pretentious side of town and my homemade clothes and haircut from my Mom didn’t help making me very popular. Plus, I had nothing in common with anyone. I hated it there. I had one friend.

But I hated my 2nd grade teacher more. I don’t want to go into explicit details. She was genuinely cruel to me. She publicly humiliated me every chance she could get. My Mom tells me she didn’t like students that didn’t “fit her lesson plan”—that’s fine, because I didn’t really want to.

Despite it being an unpleasant school people-wise, I had genuinely LIKED school. The part where you went to classes and learned stuff.

But in 2nd grade, I wasn’t learning anymore. I didn’t find the school work challenging or interesting. Sometimes the teacher was wrong and I corrected her. I fought against her because she was so mean to me. I rebelled. You can guess how well that went over.

I was an underachiever with little chance of turning myself around. I wasn’t going to become a criminal but I have a feeling my life would have been a disappointment. I hated school and I had virtually no friends. Why try at all?

When walking to school I would wander off and never arrive until they called and my Mom drove around trying to find me. Previously, I couldn’t wait to get to school.

About 6 weeks before the end of the school year, my Mom removed me from the class. I later found out there were a couple of other students who were also taken out of the class by their parents for similar reasons.

I was fortunate to live in a school district with 7 or 8 grade schools and you could go to any of the schools you wanted. One of the schools was called Elm School, and was experimenting with different teaching techniques and was the destination for anyone from troublemakers to gifted students.

Elm School was a very special place and was exactly what I needed. The curriculum was more independent and less lecture-based. You could work at your own pace in many cases. It suited me.

Since I had skipped a grade and 2nd grade at the other school was so traumatic, they decided to have me repeat 2nd grade. My teacher was to be Mrs Devine, pictured in the selfie at the beginning.

I don’t recall how long, but I hid under her desk for several days at the beginning of the school year. I was traumatized. With your typical teacher you might expect me to be ordered out from under the desk or to be dragged to the principal’s office. Instead, Mrs Devine said (paraphrased):

“We have a new student named Chris, who is a wonderful boy, and when he comes out, I think you’ll agree what a nice young man he is. You should all look forward to meeting him!”

She may have done this daily, but I don’t recall. But I knew that if I came out from under the desk, I wouldn’t be humiliated by her. I wasn’t sure about my fellow classmates but it was worth the risk because I knew she’d protect me.

When I came out from under the desk, the kids in the class clapped. I saw everyone smiling and I went and sat down at my desk. A number of kids said Hi and Mrs Devine made a point of saying how good it was to see me.

Then the class continued as normal. Instead of thinking I was the freak who hid under the desk, she was compassionate and got people to focus on the positive. She couldn’t have handled it in a way that meant more to me than how she did it.

I always admired how she handled what I would call a class of misfits. I imagine she’d disagree with that characterization but it was a very diverse group of people, economically and socially, amongst other things. Her compassion was her secret sauce that kept things glued together.

I remember some small ways that I rebelled. I always hated cursive writing. I thought it was stupid, no one could read it, it took longer to write, and was just ugly. So I just stubbornly refused. What did Mrs Devine do? She bought a used manual typewriter and tells me I can (a) write cursive or (b) type all my assignments.

So I sat in a cubby at the back typing away. Now that I think about it, it was probably slower than cursive but it made me happier.

I fluorished in her class and was now an overachiever. I had friends and I credit her with helping me not be ostracized from my 2nd grade classmates.

I had quite a few excellent teachers in my life, but Mrs Devine was not only the best, but I give her a lot of credit for who I am today. I see the path that I was on and how miserable I was and she turned that all around for me.

When Facebook appeared, I managed to connect to a number of my friends from Elm School. I probably had more friends back then than I do today! I had wondered whether I had idealized Elm School or whether it really was that much of a special place. Meeting these friends confirmed how lucky I was to have ended up there.

Everyone had their own story of their favorite teacher or just what a wonderful place it was in general. Everyone I found was successful. Even the worst of the troublemakers had good jobs or owned their own businesses, married, with families. I’m seriously not making this up.

In 2008, the year of my 20 year High School reunion (which I did not attend), the Elm School page on Facebook featured a photo of some friends of mine as well as some teachers, including Mrs Devine.

I didn’t discover these photos until a few years later, so I posted and asked about Mrs Devine and someone told me (incorrectly) that she had passed away. I was devastated. I wanted to at least write her a letter to thank her for what she did for me.

When I found out I had incorrect information about her demise, I vowed to go visit her in person, and in 2014, I went on the first of two visits to see her. It was such a surreal experience. In some ways, we picked up where we left off. She probed me with questions, taught me things, and maybe I taught her a few things.

It was like I was talking to an older version of a teacher I revered rather than someone who used to be a teacher and had taken off her teacher hat and retired to knit full time.

The teacher was still in her. The compassion, the love of learning, and teaching were all there. Her being liberal and me being libertarian led to some wonderful conversations. You forget how it is to have a conversation with someone that likes to converse and wants to learn and teach, not just someone trying to score points.

A few years later, we visited again, this time with my partner, Eric. For him it was probably surreal, but for me it was just seeing Dale again. She doesn’t want me to call her Mrs Devine anymore. 🙂

I need to give a lot of credit to my Mom for recognizing I was on a bad path and floundering and working to get me to a different school and teacher.

I also have to give a lot of credit to the school and the principal for fostering an environment where teachers like Mrs Devine had the freedom to tailor their teaching to the challenges faced by individual students. It was a formula that worked and I have never encountered a former student that doesn’t gush about Elm School.

Finally, Dale (Mrs Devine) has a better memory than me so I expect some corrections and additions from her.

Correction #1: She has pointed out that I forgot to mention that she used to wear a yellow dress that I thought made her look like a banana.